My Server came in Last week and I had some time to play with it. I looked it over a bit and found a place to put it so I can boot it up. Took a few minutes to learn the multiple bios menus. It has one for the main bios, network config, raid card, iDRAC6, and even a thing to update firmware of everything on it. All before the OS even boots.

It arrived with everything the ebay seller said it did but once I learned how to configure the raid, one of the SAS drives were faulty so I ran with one with RAID-1 configured on it until a replacement arrived. Once it did, about a week after the server did cause I ordered one shortly after I learned of that fact, I was able to go back into the RAID controller and assign the new drive to the existing RAID Array. It took some time to sync up but once it completed, it was good to go. The funny part, I was backing up the working drive before I learned how to add the drive without destroying the existing Virtual Disk. lol.

So during the week between the server’s arrival and the replacement drive’s arrival, I setup VMware ESXI 6.5 on it and installed a few VMs. Windows Server 2016 and a couple Win10 Pro clients for a mock Active Directory Setup. Currently, I have the Windows Server running AD, DNS, DHCP, WDS, and perhaps something else I’m forgetting. It’s been slightly challenging, everything on the Internal LAN side seems to work. I can install and configure a VM connected to the Internal LAN, all from the server. I’m gonna work on building a Unintended Install config to automate new VM creations. :D

It came with iDRAC6 Express which is cool, I can power it up and down remotely on cue. I ended up ordering a iDRAC6 Enterprise card on the same day I ordered the SAS Drive replacement and with that installed, I get to view the console remotely. How cool is that? Forget RDP with VirtualBox, I get to see everything it’s doing from my laptop anywhere on the lan. Outdoors if I wanted to. Anywhere on the web if I forward the ports for it. XD

The server is quite nice, just a bit noisy but I think I might try to find a place to put it where it can happily run with little to no noise to bother me with. Unless the fans kick in to high gear and everyone is able to hear. haha. I have noticed the #4 fan seems to rattle a bit so I may end up replacing it as well. I can handle a replacing a few things here and there. It is a used server after all.

Another thing I ended up doing. I added a spare SATA laptop drive I had as a sort of backup drive and for running extra vms the main drives couldn’t hold and for speed reasons. I just screwed it into the now spare drive caddy that the bad drive wasn’t using anymore. I also ordered a pair of 600GB SAS drives with caddies for more VM space and that should be here somewhere around Tuesday to Thursday of next week.

I am going to try to use the knowledge from ITPRO.TV to practice in somewhat of a real world environment. Albeit, mostly virtualized here at the house but configured how I want it. I even had a crazy idea to attach a real desktop to the AD Domain but booting a VM or even my desktop from the Physical LAN seems to give me a error once windows setup boots. Not sure why, I haven’t google’d a solution yet. 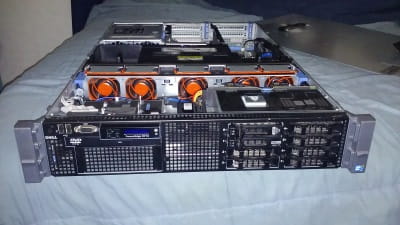 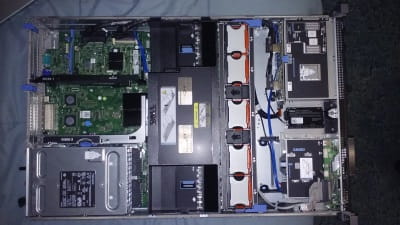 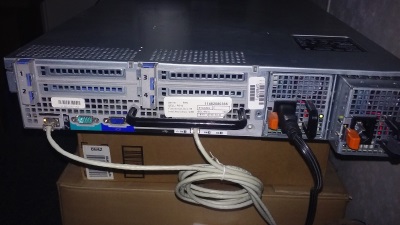