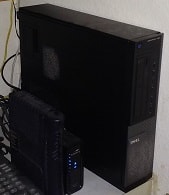 This is my pfsense box, the dell optiplex 790 computer there. I use it in place of a consumer router since the ones I’ve used in the past would quickly approach their limits. They just couldn’t handle the growing collection of internet connected devices. I have a Netgear WNDR3700v3 and TP-Link W8980v1 serving as Wi-Fi Access Points that used to serve as the home router until they started crashing or dropping connections.

I’ve been using Pfsense for about 8 months now. It can be tricky to use at times but I mainly take advantage of it’s unbound service and bandwidth tracking features. I like knowing about how much traffic goes in and out of my network. :) Unbound just lets me use custom domain names for local services instead of messing around with port numbers or host files. VLAN support can be useful once I learn how to use the firewall to shuffle traffic where I want. When I configure it to pass traffic to/from somewhere, it doesn’t always work. Probably just user error.

The pfsense box has a i5-2400 with 8GB of RAM, a Quad Intel Gigabit PCI-E Slim Card, and a Sandisk 120GB SSD. Plenty of resources to do what I want and hopefully last a long time. The SSD doesn’t see very many writes besides periodic logging and squid caching. Though the SSD somehow saw about 2.367TiB of writes but 26GiB of reads as of this writing. That could have been from me playing with squid several months ago and collecting but never using the cache it saved and ended up deleting. Oh well, it should have plenty of life. Not like I store a whole lot on it.